Cable leaked to WikiLeaks website, but yet to be published, is first and detailed confirmation of attack on Syrian nuclear facility. Document, revealed by Yedioth Ahronoth, was sent by then-Secretary of State Condoleezza Rice to US representatives worldwide

This cable is included in documents leaked to the WikiLeaks website and revealed Friday by Yedioth Ahronoth's Ronen Bergman before its official publication on the website.

The document is in fact a first official and detailed confirmation of the attack, starting with the intelligence collected before the strike, the cooperation between Israel and the United States, the troubling and harsh conclusions shared by both countries, the Israeli government's decision to bomb Syria and the fear that President Bashar Assad would launch a war in response.

"We have delayed sharing this information with you, because our first concern was to prevent conflict," Rice explained. 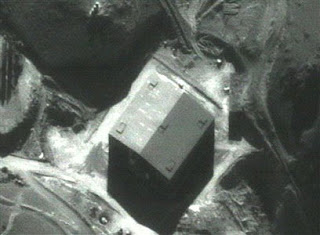 Satellite image of reactor before bombing (Archive photo: AP)
The first part of the memo details unprecedented information. "I want to inform you that the purpose of that Israeli mission was to destroy a clandestine nuclear reactor that Syria was constructing in its eastern desert near a place we call al-Kibar," the secretary of state wrote.

"The Israeli mission was successful - the reactor was damaged beyond repair. Syria has completed efforts to clean up the site and destroy evidence of what was really there, constructing a new building on the old site.

"We believe - based on strong evidence - that North Korea assisted Syria with the reactor...We have now decided that the time has come to share more information on this issue," Rice wrote.

Rice elaborates on the intelligence information that preceded the attack. "Our intelligence experts are confident that the facility the Israelis targeted was in fact a nuclear reactor of the same type North Korea built indigenously at its Yongbyon nuclear facility," she wrote.

"The US intelligence community conducted an intensive, months-long effort to confirm and corroborate the information Israel provided us on the reactor and to gather more details from our own sources and methods"

The secretary of state added that the intelligence information was solid. "We have good reason to believe this reactor was not intended for peaceful purposes," she wrote. "First, we assess this reactor was configured to produce plutonium: it was not configured for power production, was isolated from any civilian population, and was ill-suited for research.

"Second, Second, Syria went to great pains to keep this secret by taking very careful steps to conceal the true nature of the site. Third, by maintaining secrecy and not declaring the
site to the IAEA and providing design information, as Syria's NPT-mandated IAEA safeguards agreement requires, Syria undermined the very purpose of IAEA safeguards - to provide the international community with the necessary assurance/verification that the reactor was part of a peaceful program"

Rice concluded by saying that "Syria's concealment and lies about what happened for months now after the Israeli air strike is compelling proof that it has something to hide. In fact, after the attack on the site, Syria went to great lengths to clean up the site and destroy evidence of what was really there. If there were nothing to hide, Syria presumably would have invited
IAEA inspectors, other experts, and the news media to the site to prove that."
Posted by Universal Energy at 4:36 PM